The past two days have been filled with UFO sightings over Rome, and Utica New York. We have three reports to share:

The first report from Mufon came in about 9:05PM on August 5th:

It was a clear sky and I saw something move in the corner of my eye up in the sky, then I said look guys including my wife, we all saw these object moving all kind of directions and like it was controlled. then my friend went home told his wife, they grabbed his video cam and watched. then about 10:pm a big object quietly came across his side of the town he got it on cam, 3 second later it came over my home and hovered quietly. It was so smooth and bright very bright no noise at all. And it was going to a certain location. I felt happy because it was not the first time Ive seen things like this at my home I needed proof and witness, now is the time. My wife and I saw one like two years ago it was like morphing and went the same direction like this one we saw on Aug 5, 2013. last night. we have proof of object but its going to take a few day to download."

So far no videos have been uploaded. However, it was interesting that the next report came in at about 9:11PM from Rome:

Tonight there have been like 17 ore more UFO and one came close and was very big. me my wife and kids and Walter saw them. they are here and i like to know are they friendly? or why are they here for so long? etc. please believe me tonight they have been very close Time active 9:10pm till 10:48pm Monday Aug,5 2013. Rome N.Y. 13440."

This poster however is pointing out that there were over 17 objects reported in the sky. So we don't know for sure if the two connections of sightings were the same, or different. The first sighting only reported one object.

The next sighting was reported at around midnight on August 6th:

I went outside to let the dog out, and noticed a technicolor orb in the sky just above the horizon. Diving, swooping, all at tremendous speed. I took note as I have seen things of this sort at this part in the sky before. I went inside to see if my girlfriend would witness. Side note my girlfriend is not interested at all at this point. So I show her and she starts getting uncomfortable. So she goes inside and gets my roommate to see if he can see it. He does as well. All this time this thing is diving, swooping, and changing colors. All watch it for quite awhile until we get sufficiently freaked out and go inside. We sit inside talk for a couple minutes. We wonder if the thing is still out there. Go in the back and its gone. Total time about 25 minutes from first observation."

Was there any connection between this posting and the first one from Rome? 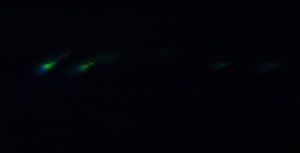 A UFO was reported over Hamilton New York on July 12th 2013. Here's the report we were able to find. Have you ever heard of Mufon.com? Mufon is a website set up for "The Scientific Study of UFOs for the Benefit of Humanity". Each day you can find hundreds of UFO sightings from all over the nation.

Source: UFO’s Spotted Over Rome And Utica On August 5th And 6th 2013
Filed Under: Rome, Utica
Categories: Local News
Comments
Leave A Comment
Back To Top